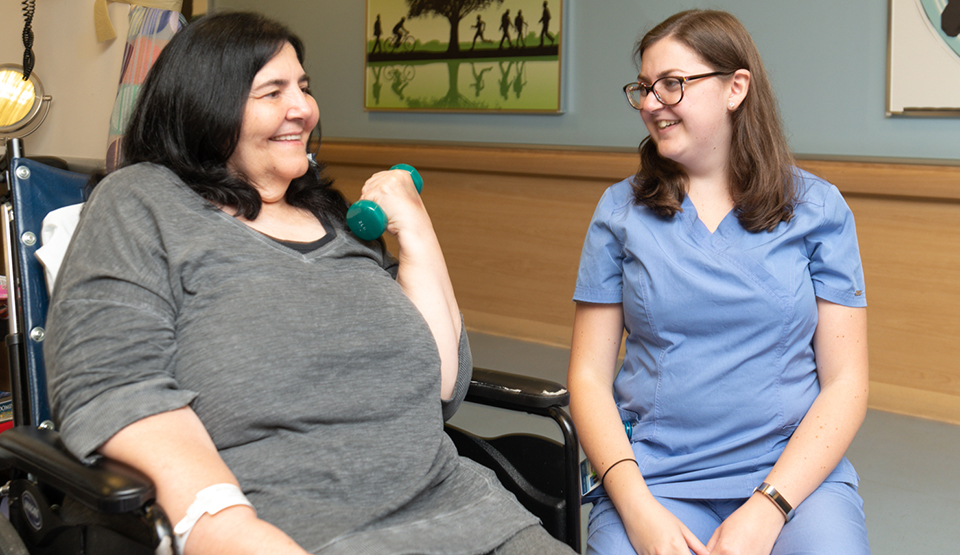 Mr. Louis Lavalley, was admitted at The Chateau at Brooklyn Rehabilitation and Nursing Center after a hospitalization at Maimonides Medical Center in April of 2017. Before Mr. Lavalley was admitted to the hospital he contracted an infection in his back and experienced a fall at home. After spending multiple days in the hospital attempting to stabilize, he was encouraged to seek a rehabilitation center to assist him in furthering his recovery. Louis decided to transfer to The Chateau at Brooklyn based on its close proximity to his home; however, upon discharge he was happy that he made that decision for many more reasons than that!

When Louis arrived at The Chateau he was in a lot of pain and was unable to walk or move at all. Any attempt that Louis would make to reposition himself would cause him so much pain, causing him to doubt whether he would ever be able to walk on his own again. The nurses all greeted him warmly and assured him that with some time and patience, the therapists would assist him in getting him back to the state he was in prior to his fall, which gave him great hope. When the therapists arrived to evaluate him, Louis was unable to get out of bed, they decided to begin with bedside therapy and told him that as soon as he was prepared, they would upgrade him to exercises in our rehab gym.

Throughout his stay Louis was very pleased with the staff and the way they took care of him. Prior to his discharge, he sat down with some of the staff to let them know how grateful he was for everything that they did. To quote him, “All of the staff here has been very friendly, anything that I needed or would ask of them, they would deliver. Ms. Agnes, the CNA, has been exceptional; she always had a smile on her face, which would brighten up my day. Tracy, my physical therapist, and Jeanne my occupational therapist, would constantly put me at ease and did everything very patiently. They would never pressure me to do something that I wasn’t comfortable with; however, they would always be there to motivate me. Without them I don’t know where I would be in my recovery process. Stephanie, my nurse, was always anticipating what my needs would be, and answered any questions that might have arisen with my health while I was here. In general, all of your staff seem to work very in sync and it’s amazing to see so many people working together as a team and you guys have exceeded all of my expectations of a rehab facility!!”

After a few weeks of participating in rigorous rehabilitation therapy, Louis was able to independently transfer out of bed as well as noticeable improvement with his activities of daily living. After graduating from his wheelchair and onto his rolling walker, he was very excited to be able to walk on his own. He did share that he was still concerned that he would not be able to walk up all the steps that he would need to climb to get into his second floor walk-up apartment. When he voiced these concerns with our team, they sprung into action and told him that they would focus more on steps for the rest of his stay to ensure that he had the confidence that he needed to go home completely at ease.

On June 27th , Mr. Lavalley was discharged back to the community just in time to be home and celebrate the July 4th weekend with his family. Upon discharge, he was happy to able to walk on his with a rolling walker and comfortably climb steps, he was also able to do all of his activities of daily living independently. The Social Work Department arranged for Lou to have further assistance with Northwell Home Care Agency to assist him with his care that he would need to have set up in his home. We at The Chateau are all happy to have had the privilege to be a part of Lou’s healing journey, and we wish him nothing but the best at home along with his family.